Focusing on the health of our labradors and offspring produced by them is foremost in our breeding ethic. A healthy pup is a happy pup.

Due to the generally sound construction of the labrador, health problems are less of a big deal than they are in some other dog breeds. But as with all breeds, there are still a number of labrador health issues that have been identified. This page will cover some of the more common ones.

Almost certainly you would have heard of hip dysplasia in large breed dogs, and unfortunately the labrador is no exception. Whilst the labrador is generally healthy and well-constructed, with strong well-proportioned bodies, hip and elbow dysplasia can occur.

Two known factors determine whether hip dysplasia will occur and if so, how bad it will be. These are hereditary (genetic) and environmental influences. It is important you have knowledge about dysplasia, so that you are fully informed, can interpret your puppy’s parent’s hip and elbow scores, and understand disposition to dysplasia.

Dysplasia presents in dogs as instability of the hip joint (or elbow joint). In a normal hip, the femur is connected to the hip joint with the head of the femur (ball) sitting in the acetabulum (socket). In dogs who develop dysplasia, the ‘ball’ doesn’t fit as well in the socket as it should, resulting in joint laxity (looseness). Because the ligaments become overstretched by the looseness (causing the ball and socket to grind against one another rather than sliding smoothly), the joint attempts to re-establish stability by laying down new bone, creating spurs and scar tissue. This, coupled with the degeneration of cartilage (wear from rubbing), is what eventually causes lameness and painful osteoarthritis of the joint.

Several influences lead to development of dysplasia in dogs. A genetic predisposition can be amplified by environmental factors, such as excessive growth, over-exercise, being overweight, improper nutrition, disruption of hormones (such as spaying a dog too early before fully sexually mature), inappropriate or overly-excited activity, repetitive stair climbing, and jumping down from objects.

These are the ‘outside’ influences that alter and shape the growth and functions of the bones, cartilage, ligaments, tendons, and muscles of the body. We carefully explain environmental prevention in our puppy pack.

Hip dysplasia results in inflammation and pain, and may cause a range of observable signs such as changes in gait, lameness, stiffness after rest, exercise intolerance and noticeable pain (in those dogs more severely affected). 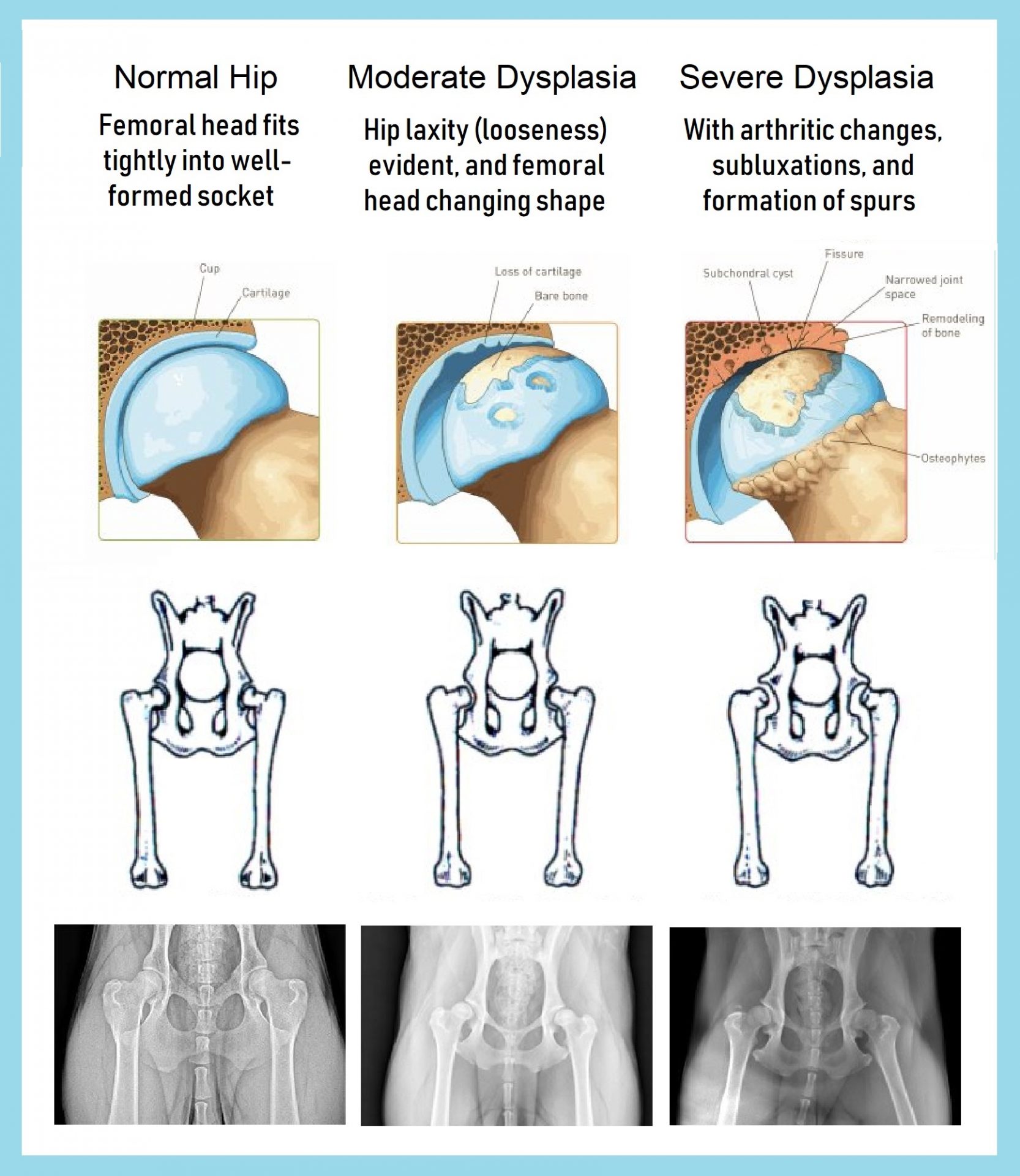 The Australian National Kennel Council manages a scheme to reduce hip and elbow dysplasia in registered purebred dogs. Under CHEDS (Canine Hip and Elbow Dysplasia Scheme), breeders are required to have their dogs’ hips and elbows tested and ‘scored’. This is an expensive screening ($600-900 per dog) requirement, but very necessary. The joints are xrayed by a veterinarian, the images are analyzed, and a ‘score’ is determined by one of the accredited radiologists on the ANKC-approved panel. Results are submitted and registered with the ANKC.

A perfect hip score would be 0:0 (0) but, very few labradors (or any large breed) will have this score. A slight irregularity in the ball or socket may give a score of 2:3 (5), this would be considered very good hips. The more irregular the ball and socket becomes, the higher the resulting score. A lower score means better hips. 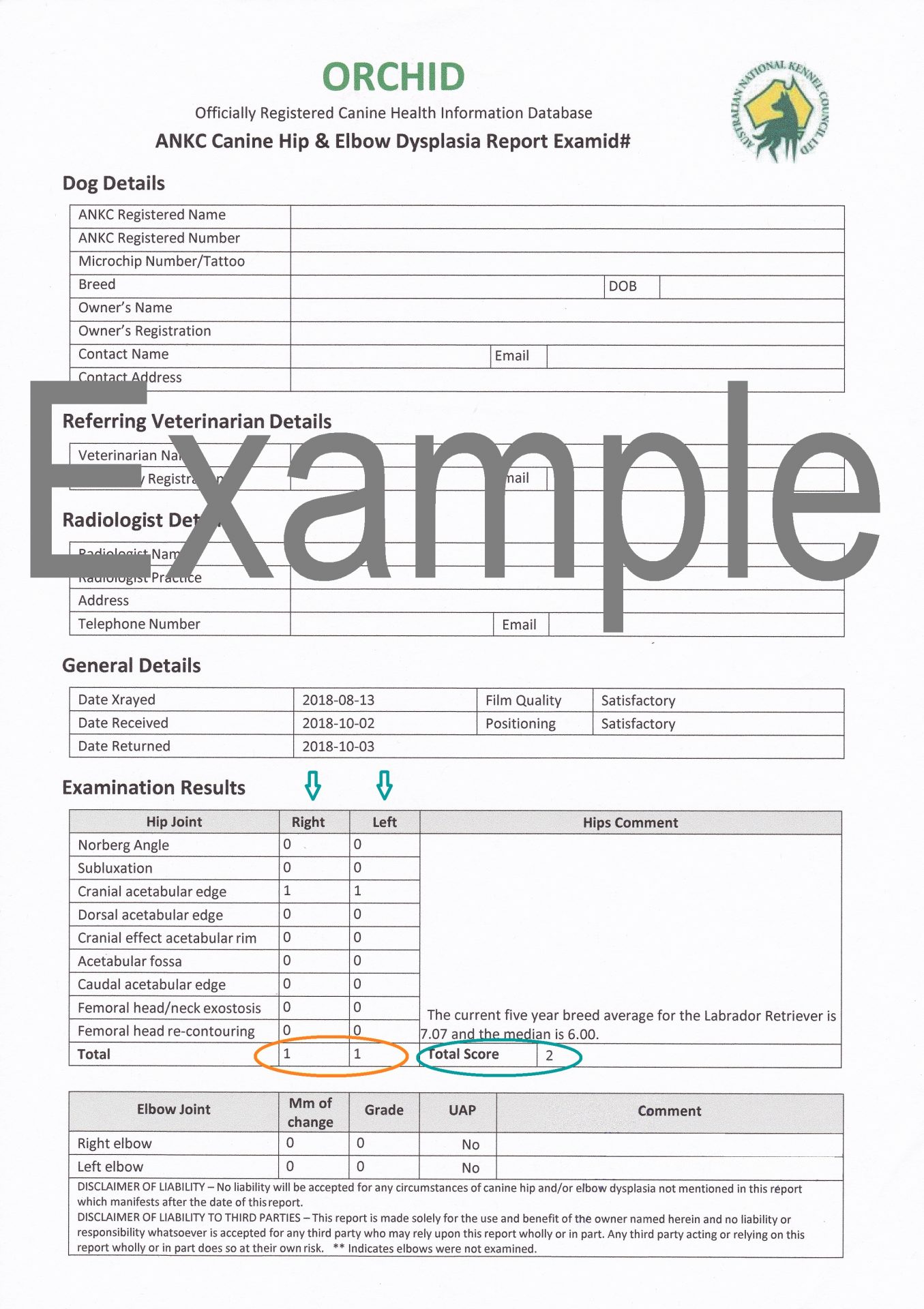 Not only do we have hip and elbow scoring done, we also study the genetics and bloodlines of previous generations and combine this knowledge with our scores and assessment of our dogs’ conformation and structure, to determine which bloodlines will produce the best puppies, with proper structure and good health. Many, many hours of research and analyzing goes into this aspect of breeding.

Whilst the breeder makes every effort to minimize dysplasia through screening, assessing genetics, and analyzing bloodlines, it cannot be guaranteed that your puppy will not develop dysplasia. Since environmental influences have been proven to play a significant role in whether or not a puppy later develops dysplasia.  And you, the new puppy owner, owes a responsibility to your pup to help minimize his chance of developing dysplasia by controlling the environmental influences. Following exercise guidelines, feeding a healthy diet, not allowing your labrador to become overweight, and supervising his type and level of activity, is your role in preventing dysplasia.

We use the Labrador Full Breed Profile genetic test for our breeding dogs. DNA tests screen for diseases and traits that are relevant to labradors. In the Full Breed Profile DNA screening, 17 diseases/disorders/traits are tested for.

DNA acts as a set of biological instructions that are stored in code-type units, and could be thought of as recipes with instructions, since they are the building blocks for the dog’s body.

A breeder assesses the DNA results of their dogs to determine suitability and compatibility for breeding. The breeder is analyzing whether a dog is clear of gene mutations, carrier of a mutation, or affected by a gene mutation. By analyzing DNA test results, a breeder can determine, according to genetic predisposition, what genetics will be passed on to the offspring in what probable percentages.

Genes and mutations are complex to understand. There are several modes of inheritance, such as autosomal dominant, autosomal recessive, X-linked, and complex inherited disorders.

Autosomal recessive conditions can only occur when a dog has two copies (alleles) of a mutated (faulty) gene: dogs inherit one copy (allele) from each parent. Dogs with only one copy (allele) of the mutant gene are said to be carriers and can potentially pass on the mutated allele to their offspring but are not affected by the disease themselves (will not suffer any symptoms of that disease).

A ‘Clear’ result on a DNA test means the dog has two normal copies/alleles of the gene (does not carry a mutated gene) for the disease tested.

A ‘Carrier’ result on a DNA test means the dog carries one normal copy and one abnormal (mutated or faulty) copy gene but will not be affected by the disease. Providing this dog was mated to a ‘Clear’ dog, no puppies ‘affected’ puppies will be produced, since you need two ‘carrier alleles’ (remember the pup gets one allele from each parent) to create an ‘affected’.

An ‘Affected’ result on a DNA test means the dog carries two abnormal alleles and can be affected by the disease (can display symptoms of that disease). If the dog is mated to a ‘clear’ dog, the puppies would at most be carriers but not affected. Since two affected alleles are required to be present in the offspring to be affected, and they only get one allele from each parent (so one clear and one affected will equal a carrier, but not affected).

The diseases screened through the DNA test we undertake include:

This chart shows the genetic probability for inheritance of autosomal recessive diseases. 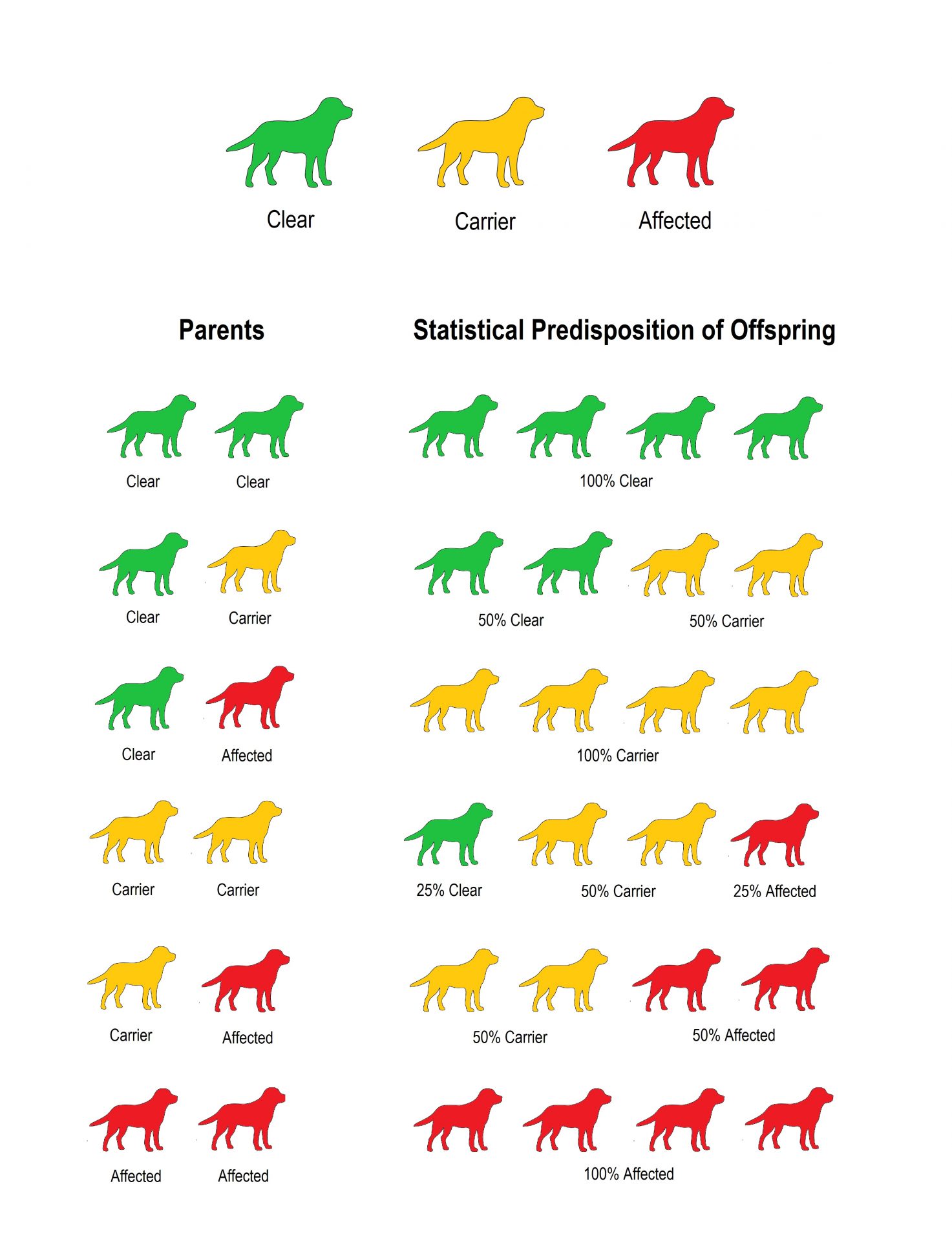 EIC has been being tested for a while in labradors.

EIC is an autosomal recessive genetic disorder causing affected dogs to experience a collapse during or after extreme exercise. Typically an affected dog starts to manifest the disorder around five months to three years of age. Not all types of exercise can induce an attack: the dog generally would be actively running or excited for an extended period of time.

Because EIC is a recessive disorder, a dog must have two copies of the muted gene in order for the disease to manifest. This means a dog can have one copy of the mutation and not experience EIC, but would be considered a carrier. Dogs with EIC can still lead full lives. However, its important to be familiar with what types of activities trigger an episode.

PRA terms a group of inherited eye diseases that cause loss of vision due to degeneration of the retina. Testing for PRA has been available since the mid-1990s. Its known in each breed of dog, including mixed breeds.

Although PRA in most affected dogs cannot be cured, in the opinion of many modern veterinary ophthalmologists, it is no longer a hopeless disease that always leads to complete blindness. New insight into the mechanisms of retinal damage from oxidative stress has resulted in much more hope for prolonging vision of affected dogs.

HNPK is an inherited skin disorder that affects labradors. It is characterized by the development of dry skin and crusting on the nose, that can lead to cracked skin, fissures, and chronic inflammation of the skin on the nose. Generally parakeratosis is a benign skin condition. It is not physically contagious.

DM is a progressive ‘degenerative’ neurological disease of the spinal cord and nerves, predominately seen in german shepherds over six years of age, but found a handful of other breeds aswell, including occasionally in labradors. The human equivalent would be motor neurons disease. Degradation of the myelin sheath causes disruption to signals and messages from the brain reaching the intended destination, such as movement signals getting to the legs. Initial symptoms are loss of coordination in the hind limbs, progressing to loss of hind leg use, rendering the dog immobile and causing atrophy (loss of muscle), incontinence, and eventually difficulty breathing and failure of major organs as the nerves further up the spinal cord become affected. The nerve disease renders the dog paraplegic, and is not painful. There is no cure for DM, however, there is a medication regime that helps slow down the progression of the disease.

Much like in our human world, there are many types of canine cancer. The most common types in labradors are: lymphoma, hemangiosarcoma, mast cell tumour, melanoma, osteosarcoma, and mammary cancer. Current statistics show that about one in four dogs will develop cancer.

Taking care of your dogs nutrition and weight are important protective factors, as well as minimising or hopefully eliminating exposure to known carcinogenic substances. Having female labradors spayed after one or two cycles is also evidenced to be a strong protective factor, especially against mammary tumours.

If a dog goes suddenly lame or is limping in one of the hind legs, he might have torn or ruptured a cruciate ligament. Common tears involve the anterior (also known as cranial) cruciate ligament. Much like in humans, such as athletes and sports players who often sustain cruciate tears.

The cruciate ligaments are two bands of fibrous tissue located in the knee joint. They join the bones above and below the knee together so that the knee works as a hinged joint.

Like in dysplasia, environmental influences play a huge role in ligament injury. Over exercise, inappropriate or overly excited activity, obesity, jumping up and down from objects (especially cars and furniture), improper nutrition, disruption of hormones (such as spaying a dog too early before fully sexually mature), are the major external influences.

A tear may be full or partial. There are several treatments options. Surgery is not always necessary for partial tears and conservative management is first advised. A full tear usually requires surgery at some stage but conservative management might be trialled initially. If you suspect your labrador to have a cruciate ligament injury, please contact us and let us know first. Making an informed decision on treatment options for cruciate injury is very important and in our experience clients are often only given a surgical option by a lot of veterinarians, when in fact there are well-documented conservative treatment options that should definitely be considered as first. 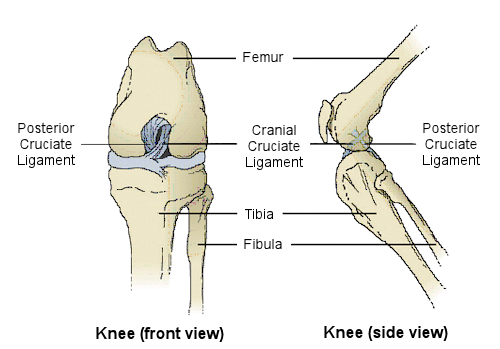